Who does the Bhagavad Gita belong to?

It has taken me the better part of two years to complete my first reading of Devdatta Pattanaik’s “My Gita”. I am sure that I will go back to it time and time again, for it is a treatise on the Bhagavad Gita, that ultimate “lifestyle” manual. The current remarkable obsession with “self-exploration, self-examination, self-actualization”, and, apparently, “selfies”, may have had its beginnings in the “self-realization” discussed in the book, through the millenia spanning the composition of the “Bhagavad Gita”.

I have often picked up a “Gita” I purchased while still a fledgling in the thoughtful world, (I still am), but have not got beyond the first verses. It’s heavy Sanskrit text and lumbering translation kept the book on my bedside stack, always as a to-be-read.

Devdutta Pattanaiks’s “My Gita” is not a translation or transliteration of the Bhagavad Gita. Instead it is series of 18 essays on what Pattanaik considers to be the 18 themes of the Gita. It does not cover the Gita sequentially, as the themes he has identified are not isolated by chapter, but rather sprinkled within multiple discourses through the whole collection or “song”. It is important to remember this while reading the book, as it gives it a very different experience to reading the Gita.

To my mind, this book has been about understanding the value of the Gita in my 21st century hectic, and often seemingly rudderless existence. On days I have felt the buzzing of restlessness, the pages have soothed me. On days I felt calm, I have had moments of eye opening wonder.

I am delighted that I can come back to this book time and again in order to calm myself, and experience more moments of blinding understanding. I might even attempt the Sanskrit version again, one day. I just need to understand that I do not need to read either in a linear, consecutive manner. I can open them to any page, and attempt to absorb the wisdom they contain.

Ultimately, while this book is Pattanaik’s take on the Bhagavad Gita, the original, as seen in these essays belongs to all.

Hopefully the few editing oversights have been corrected in future editions of the book. 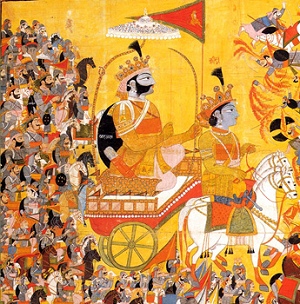 Once in a while, an experience comes along, which can make or break a life pattern. An experience which can create a life so fraught with change that one does not know whether it is a life broken or a life built.

Perhaps, just perhaps, Yann Martel’s “Life of Pi” is one such experience. The name conjures up the vision of an orange and black flash of a 450 pound Royal Bengal tiger, a boy and a wide blue sea.  The prison of the vast sea, the freedom of the boat, the dangers of a life with no challenges, the safety of continually living on the edge of disaster are some of the themes that the story plays with.

Heaving and swaying on the Pacific Ocean, in a rudderless boat, in charge of staying alive and ensuring the ongoing life of a tiger, Piscine Molitor Patel forges his belief in God. He has grown up in a Hindu family, where, nevertheless, religion was not paramount. Pi nurtures within himself a belief in God with guidance from three religious wise men, of the Hindu, Islam and Christian faiths. In a country where these three religions have marched side by side for centuries, he imbibes a wisdom far beyond his adolescent years. He shows mature wisdom in his choices, even before he finds himself as the sole human survivor from a shipwreck when on his way with his family, and some of his family’s zoo to Canada.

In his Preface, Yann Martel promises us a story that would make us believe in God, and proceeds by numerous devices to prove his point. But the beauty of the storytelling is, that, if one stops trying to relate to the symbolism and the overt attempts at creating a parable, if one just slides into the being of Pi, one learns so much about oneself. Just like life, all is revealed when one just let’s go.

At seventeen years of age, Pi is tossed into a life most others would see as a nightmare, and he turns it into a dream, in face of  the unforgiving, harsh realities. He walks with God, and each day becomes a little bit more one of the Universe.

Does the book make one believe in God? I wouldn’t know. To me it is not a matter of choice to believe in God. One does not ask, “Do I believe I need oxygen to live?” One breathes in, one breathes out. One carries on.

The “Life of Pi” sets one’s mind free. Free to travel beyond the reaches of the mundane and the predictable. It allows the mind to grasp the possibility of true faith. Not a Faith that is bound by religion, or the persistent dictates of an institution. On the other hand, a faith that whispers in the breeze “ All is good. All is right. How could you have ever doubted?”

Hence, this is a challenging book. It can scare people into reacting and running the other way. Into hurling insults at it. But behind this reaction, it is easy to see that a few layers have fallen off the readers’ eyes, and they are dealing with it! 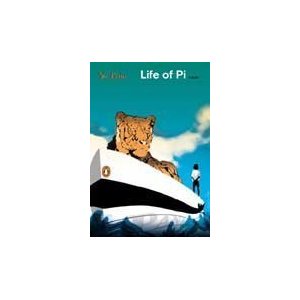 The movie : By Ang Lee